My next blog post was meant to be all about a summer that’s been largely spent working with butterflies in France, Greece and Spain – a sun-drenched, joyous examination of a strand of my developing life as a wildlife tour leader alongside the nature writing irons I keep in the fire.

However, that’s not how these things work out. I’ve spent the past few days exploring the French side of the Pyrenees, half-heartedly looking for ghosts. Those elusive phantoms are, of course, Ghost Orchids, the holy grail of European orchid hunters, the wraiths of the deepest, darkest corners of our woods and forests. And the half-hearted bit of this tale? Well, I’m meant to be having a little break before the tumult that’s an autumn spent writing and birding, in Shetland and further afield… but when there’s the remotest possibility of seeing a Ghost Orchid, I could hardly sit by and not at least try to find one.

But who am I fooling? This hasn’t been that half-hearted a search. I’ve been scrambling up and down steep mountainsides clad in deep, mossy forest, and have pushed my way through overgrown thickets following the tracks carved in the understory by wild boar. Parts of rural France have the feeling of full-blooded wildwood.

Researching and writing the Ghost Orchid chapter of Orchid Summer was one of the highlights of the year I spent immersed in all things orchidaceous. Perhaps no other orchid found in Britain has such a redolent, colourful history as Epipogium aphyllum. I spent a lot of time dwelling upon that in the past few days as I nursed my scratched arms and carefully made my way through the shadowy recesses of the Pyrenees.

Sad to say, I didn’t find a Ghost Orchid on this occasion. I am, perhaps, a week or two too late this summer for this area of France. What I did find was, on the one hand, promising – woodland floors thick with Dutchman’s Pipe Monotropa hypopitys and an abundance of fungal bodies that hints at a rich myccorhizal network beneath my feet – just the sort of place a Ghost Orchid might favour. 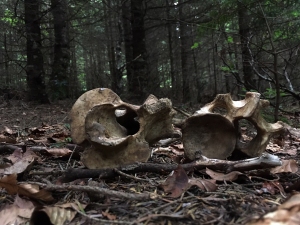 Spending so much time in dark, remote places provides time for the mind to explore darker recesses of one’s fears. It’s fashionable in contemporary nature writing to speak of woods in warm, affectionate tones, but that’s not always how they make us feel. Or, at least, not me. An eroded cross marks the path up into the trees. Brown bones strewn on the dead leaves at one’s feet are an unsubtle clue to the cycles of life that have played out in times past, but give no hint of what end befell the animal that passed that way before me.

Those extravagant fungi are flourishing on decaying matter. And when low clouds sweep in and envelop the mountains, the birdsong suddenly stops, and all one can hear is the shocking report of a shot ringing out nearby, and the ringing bell-tones of a hunter’s dogs giving voice… then it is becomes hard to leave the dubious sanctuary of the trees and expose oneself to unseen eyes in open ground.

I found myself torn by my time alone in the montane forests. Pulled by the irresistible urge to discover unseen gatherings of pallid, otherworldly orchids… and repelled by the fears with which my imagination painted the landscape.

We do not belong in these dark, owly places…