When I set out to see all of Britain and Ireland’s orchid species in the course of researching Orchid Summer, seeing all of our native Ophrys orchids did not appear to offer an enormous challenge – we have, after all, just four species, namely Bee, Fly, Early and Late Spider Orchids. Of course, the reality was somewhat different as, in addition to seeing those four beautiful species I also searched for their myriad, jewel-like variations… and moreover, there was also the small matter of finding Britain’s sole, controversial, Sawfly Orchid.

It’s a very different story indeed in the rest of Europe, where there are – depending on which taxonomist’s views one subscribes to – over a dozen or closer to one hundred further species to be found. One taxonomist’s subspecies is another orchid fanatic’s full species…

I’ve spent a little time recently in the Aude department of France. Towards the end of my stay the first Ophrys orchids were beginning to come into flower – and which species these variable flowers could be ascribed to is a perfect metaphor for the flux and confusion that this particular family of orchids generates.

To a British orchid-hunter, they look fairly similar to our Early Spider Orchids. So far, so good and, like our Early Spiders, the orchid flowers I found in Aude varied considerably in their appearance both in structure and patterning. So what were they?

Pierre Delforge’s monster European orchid field guide calls them Ophrys arachnitiformis, known colloquially as False Spider Orchid. The latter name is a handy one, as the Latin varies considerably between authorities – other botanists refer to them as Ophrys exaltata subspecies marzuola; while Henrik Pedersen, author of a monograph devoted to European Ophrys orchids, recognises them as Ophrys x arachnitiformis. 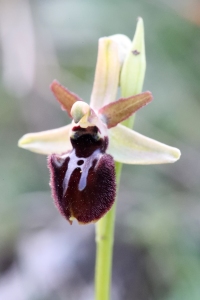 That ‘x’ is telling – it indicates a hybrid origin. Pedersen contends that Ophrys x arachnitiformis is a “partially stabilised hybrid complex” – one born long ago, at least in part, from Early Spider and Late Spider Orchid parents… but with other subspecies of both of those species probably contributing their genes at some point or another. This is, by any standards, pretty vague stuff!

I find this sort of intractable orchid esoterica fascinating, though I appreciate that it’s not everybody’s cup of tea… but what I couldn’t ignore were just how lovely these, my first Ophrys orchids of 2018, actually were. I seemed to find them wherever I looked – both in the tranquil surroundings of earth tracks meandering through vineyards and, less salubriously, on roadside verges, beside abandoned industrial units and even growing alongside a rubbish bin outside a McDonalds.

Their variability is, if we’re following Pedersen’s lead, testament to their complicated heritage as well as part of their considerable charm. Delforge could, on a good day, probably make a handful of species out of them! 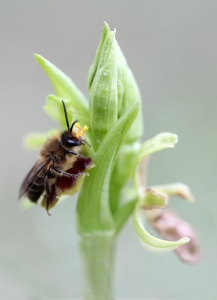 I was simply delighted to begin to immerse myself, once more, in orchids. Best of all, I finally got to witness one of the most remarkable facets of orchid biology – a male bee attempting to mate with an orchid flower, fooled into an act of sexual folly (known as pseudocopulation, kindly featured as a Word of the Day last week by Robert Macfarlane) both by the flower’s resemblance to an insect and by it creating scents that mimic the pheromones released by a virgin female bee. Seeing that for myself would have been good enough – but getting to photograph it too was just fabulous.

In just a few days time, however, I’ll be heading for the Eastern Mediterranean and an absolutely dizzying array of Ophrys species, subspecies and hybrids. I shall need to do my homework in advance of this, my first outing as a tour leader on the Greenwings Orchid Odyssey to Rhodes. Ophrys heaven awaits me…