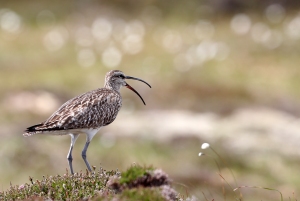 Whimbrel – a regular summer visitor outside the house

These are strange and unprecedented times, times when many of us are, for the most part, staying at home. I should be away leading wildlife tours at the moment. Then again, we should all be out and about doing something right now, but we’re not.

I’m going to make the most of the situation at home – there’s essential maintenance the house could do with, it’s a chance to grow a lot more vegetables than I’ve had time to do in recent years, and there’s always birding…

Yes, there’s always birding. A  week ago, Chris Packham started an online community called the Self-Isolating Bird Club. You’ll find it on Twitter here. Well worth a follow, and why not join in? Many of us have swapped our workplaces for home for the foreseeable future, so it’s a good chance to see what we can see from the kitchen window. Also, have a look at submitting your records to the British Trust for Ornithology’s Birdtrack – an easy bit of citizen science to do.

I thought I’d give it a go too, with one of the most northerly self-isolating bird lists in Britain. A little about where I am… I’m based in Shetland, and my house sits high on a peninsula, 40 metres above sea level, on the north-eastern extremity of one of the easternmost islands in the archipelago. I’m surrounded by sea nearby on three sides of the house, just a couple of fields away; one of those fields is maritime heath, and popular with breeding wading birds.

On the south-western side of the house lies the rest of the island, with a large area of heathery hill running west for a couple of miles. There’s obviously a lot of scope for seeing seabirds, but there’s also a freshwater loch visible from the house, so wildfowl are always possible.

No Chaffinches or Greenfinches… but we do have Twite

I’ve a few small trees growing in sheltered spots around the house – trees take a long time and lot of effort to establish here. Most of Shetland lies above 60 degrees north, so it’s a subarctic and oceanic climate – winters are harsh and wet, and summers are cool. The growing season in summer is short – but conversely, quite long, as by midsummer we’re enjoying some 20 hours of daylight every day.

And the birds? Well, it’s an unusual collection. We’ve not got the usual garden birds here – no Blue Tits or Great Tits, no regular Chaffinches or Greenfinches. Even Blackbirds are only irregular breeding birds at my end of the island. That’s made up for by breeding wading birds around the house – seven species have bred in my fields, with a couple more nearby. One memorable year Red-necked Phalaropes tried to breed half a mile away. Red-throated Divers breed nearby, and I can hear them calling from the bedroom windows in summer.

Skuas nest on the nearby moorland – both Arctic and Great Skuas – while a couple of years ago half a dozen Long-tailed Skuas spent a while in residence too. That’s one of the joys of this remote location – you never know what might turn up out of the blue. It’s like playing a birding lottery every single day – something surprising might be found at almost any time. 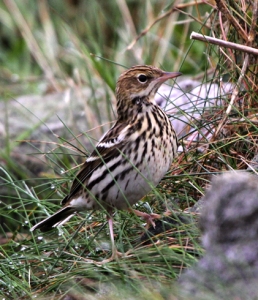 Sometimes *really* rare birds turn up, like this Pechora Pipit

I’ve been here nearly 20 years now, and the house list isn’t doing half badly – currently resting on 183 species. That includes some outrageous rarities, lost birds many hundreds or even thousands of miles from where they ought to be. New birds, however, come only sporadically these days, with sometimes a year or two elapsing before I add a new species to the list. Maybe in the weeks to come that might change…

In all the time I’ve lived in Shetland, I won’t have been at home quite as much as I will be this coming spring and summer. I’m going to keep count of what I can see from the boundaries of the house and garden in the weeks to come. There won’t (probably) be any tits… but there may be some surprises during spring migrations, and there will certainly be some birds somewhat out of the ordinary breeding here as the summer unfolds.

In chronological order, the list is as follows (occasional diary entries below): 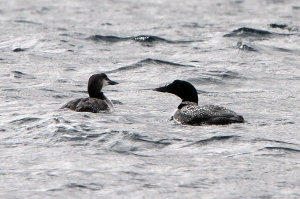 Golden Plovers are present here year round, breeding within sight and earshot of home

As of today, 26th March, my Self Isolation Bird List sits on a modest 25 species. There are no great surprises to report, with a fairly average selection of late winter birds, but there have been some notable sightings – both Wigeon and Goldeneye on the loch; a count of 23 Great Northern Divers visible yesterday afternoon on a calm sea; plunge-diving Gannets close enough to hear the whoosh as they hit the water; and, this morning, my first spring migrants in the garden – two Robins, and a Chiffchaff.

27th March – four more species, today, including Blackbird… I can’t believe it’s taken three days to see one, but they’re noticeably absent after a few wet winters. Today’s female bird could be a migrant that’s come in on the same winds as the Robins and Chiffchaff yesterday – of which no sign of either today. Further additions Redshank, Golden Plover, and a flyover flock of Twite, announced by their buzzy flight calls. I wonder what the 30th species on the list will be?

4th April – the 30th species, recorded on 28th March, was a rather overdue Fulmar. They’re usually ubiquitous around the shore near the house, so it was a little surprising it took this long.  Followed in fairly quick succession by Raven and then, yesterday, a flyby Cormorant heading east along the shore towards the Out Skerries. This evening, about to put dinner in the oven, I was distracted by something fast and dark, chocolatey brown. Surely a Merlin? And yes, it was – the 33rd species of my lockdown list.