Our final full day on Rhodes began, for the guides, with a pre-breakfast expedition a few miles out of the village following up a rumour of a colony of yet another delectable Ophrys, Ophrys lucis. The directions we’d been given seemed specific enough, but despite Yiannis and I spending over an hour covering a lot of ground, we couldn’t find any orchids, let alone our target. Something, clearly, was amiss. I resolved to resume the search in the evening. 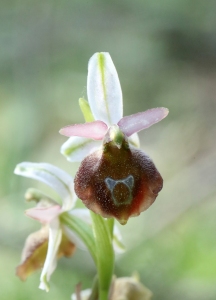 First, though, we had an outing to Profitis Ilias, a renowned orchid-hunting site on the island. Renowned does not necessarily translate to well-known – it takes either excellent gen or prior experience to know where the most fruitful hunting grounds are on the slopes of this towering mass. A generous slab of luck never hurts either, as any orchid hunter would attest. 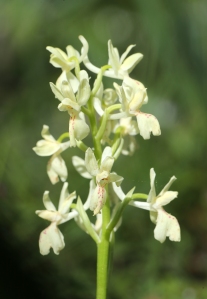 Our luck today was emphatically in, for all we knew where we were going and what we were hoping to see – for we found more besides. Inevitably, there were plenty more Ophrys rheinholdii from the very moment we set foot outside the vehicles – these had been almost constant companions this past week.

Amongst them, as if scripted, were two examples of O.lucis, pale beauties compared to their dark velvety brethren. Both were dusted thickly with a coating of tree pollen that hung in the air like clouds of icing sugar.

Nearby were more examples of Neotinea maculata, and the pale primrose yellow forms of Orchis provincialis. Within just minutes of arrival, in the form of the latter and O.lucis, we had two new orchids for our list, and stood on the cusp of a mightily impressive 40 species recorded for the week. 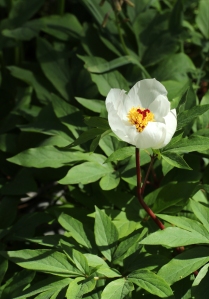 Yiannis proved to be on fire this morning, and his sharp eyes found first one and then another new Ophrys species in quick succession – O.cinereophila rapidly followed by the equally rather unassuming O.persephone. Throw in more O.dodekanensis and we were on something of an Ophrys roll by this point – but could not move on without seeing the endemic Rhodes Peony Paeonia clusii ssp.rhodia sporting large, lush white flowers that glowed beneath the overarching tree canopy.

Later in the morning we headed uphill, to a site where I knew there should be a colony of Anacamptis picta, a very close relative of the Green-winged Orchids A.morio some of our guests were familiar with back home. The previous year this site, clinging to a rocky crag on the side of the mountain, had harboured a sea of wildflowers and, amongst them, several dozen A.picta and O.rhodia too.

As our group enjoyed that bonanza the tolling of goat bells announced the arrival of a herd of goats scrambling up the cliffs beneath us, and one of the guests joked that there would be no orchids for me to see next year…

This proved, unfortunately, to be darkly prophetic, for the sea of wildflowers was no more – just a closely grazed grassy ledge where once they bloomed. Distraught, I searched amongst the shattered rocks that lay around the cliff edge and, fortunately, found a couple of flowering A.picta after all. Not the display I’d hoped to share, but good-looking flowers nonetheless and yet another new species for everyone.

Taking our leave of Profitis Ilias for the afternoon, we headed towards our regular site for Ophrys mammosa – an orchid that, as the scientific name suggests, is said to have a hint of breasts about it! I’m not quite sure why this particular Ophrys was singled out for this distinction, but it’s now saddled with that name for perpetuity.

None of which takes away from the fact that it’s a beautiful, rather architectural and statuesque orchid. We found several dozen where we’d hoped they would be and, nearby, while the guests enjoyed a picnic lunch and some showy Scarce Swallowtails, I found one more Violet Limodore Limodorum abortivum coming into flower.

This suggested that a nearby site might be worth a visit – a riverside woodland where the limodores abound and, amongst them, some scarce ruby red variants may sometimes be seen. The river in question was running high after all the recent rain so, while the group enjoyed more O.cornutula and O.sicula to a soundtrack of courting Karpathos Frogs, I took off my walking boots and socks to wade across to check on the state of the limodores. 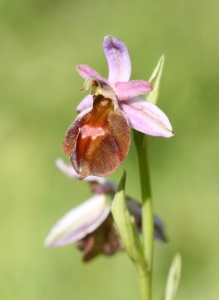 Sadly that dedication wasn’t to be repaid with any in flower, but I had clearly appeased the orchid-hunting gods for, when we returned to the hotel in the late afternoon and I tried once more to find the vaunted colony of nearby O.lucis, on this occasion I got lucky – much further away from the village than I expected them to be, but a loose colony of over twenty examples of this pretty flower – rather darker than the flowers we had seen earlier in the day on Profitis Ilia, and in fresher condition too.

There wasn’t time to collect my guests to see them before a final, delicious dinner – we had a lot to celebrate, having found 43 species of orchids in the space of six days – but made sure that we built in a little time the following morning to pay our respects to them on our way to the airport. An orchid odyssey on an island like Rhodes doesn’t stop until the moment the wheels of the plane lift from the tarmac…

NB – I should be leading the Orchid Odyssey tour in Rhodes for Greenwings this week – due to the coronavirus outbreak that’s been regretfully postponed for 2020. Instead, I’d like to invite you all to join me on a virtual orchid-hunting tour there, with daily posts throughout the week. I hope you enjoyed them.