A Rhodes Orchid Odyssey (i)

Our arrival on Rhodes was tumultuous, to say the least – we flew in on the wings of a violent storm that closed airports across the eastern Mediterranean, descending through black clouds towards the island before, to our dismay, being told our final approach to land had been aborted and we would be making, instead, for Athens. After some chaotic hours in the airport there courtesy of a disorganised and disinterested Ryanair, we finally boarded an overnight ferry to Rhodes – an island in the far eastern Mediterranean region that’s an orchid wonderland.

If we had lost an afternoon in the field, it was an afternoon that would have been deeply unpleasant – the island was lashed with wind and rain, the latest manifestation of a confused winter in the region that had delivered deeply unseasonable weather patterns playing out for weeks on end. Sunshine greeted us on the quayside and, with our vehicles awaiting our arrival, we were soon on the road and making up for lost time. 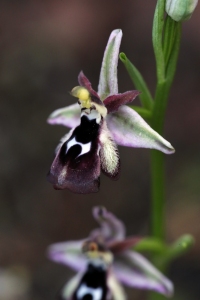 We made our way to Mount Attaviros, an orchidaceous destination only a short distance away from our hotel for the coming week. This is a favourite site of mine on the island, and it never fails to deliver good orchids – though no two visits are ever quite the same. A meadow on the lower elevations that was, in 2018, bursting at the seams with flowering plants was, in 2019, a pale shadow of its former self, appearing to have been heavily grazed. Any disappointment was completely outweighed by the abundance of orchids on the verges, where they were noticeably more abundant than hitherto. And what plants they were – drifts of Ophrys rheinholdii, dozens of plants, with velvety, fresh flowers in Guinness tones.

Amongst those ravishing hordes we found Ophrys dodekanensis, a more subtle bee orchid species that would normally have finished flowering by this point in the spring, with sepals of both cool white and bubblegum pink.

These were a welcome surprise, and an early clue that the flowering season might be somewhat delayed – an impression reinforced by the asparagus-like appearance of Violet Limodores Limodorum abortivum – where in 2018 we found stands of glorious flowers, this year we could only see purple, spiky shoots bursting from the forest floor. We could however perhaps expect to see some species in the coming week that we might not normally encounter…

The banks of the road were carpeted with the sky blue of Lithodora hispidula and the snow white of the endemic Cyclamen rhodium, wildflowers that, whilst not orchids, were impossible to ignore. As we walked slowly up the mountainside the orchid flora changed, imperceptibly, those exotic O.rheinholdii giving way to the primitive flowers of Ophrys omegaifera. Rocky outcrops were dotted with many fine, delicately flowered Orchis anatolica. 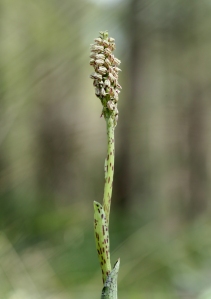 In the forest understory were yet another orchid that should have finished flowering by now – the subtle, freckled forms of Dense-flowered Orchid Neotinea maculata. For a while it was hard to know which way to point the cameras, as a showy Eastern Festoon butterfly came and posed obligingly amongst us. This was spring-time nature watching at its Rhodian best. 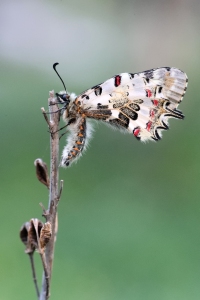 We paused for a picnic lunch halfway up the mountain – the Greenwings founder, Matt, lives on the island so we were treated to delicious homemade Greek food courtesy of his mother in law, a welcome treat and fuel for the afternoon. We took our vehicles to where the tarmac ended, and a gravelled track continued up into the higher elevations of the mountain, pausing to assess the state of the unmade road. The previous day’s rain had left large puddles and there was evidence of some considerable passage of water – deeply eroded channels in the road surface here and there. We would go as high as we safely could, but would take no chances or risks.

Nor did we need to, for we climbed to a likely-looking area of habitat and, upon leaving the vehicles for a wander, began to find plenty more Orchis anatolica and, here and there, dramatic fossils on the occasional exposed rocky outcrops. Neither of these were, however, what we were hunting for here – that was a locally rarer orchid altogether, Neotinea lactea, and in time we found first one and then a second fine example of this compact and subtly beautiful orchid, with crisp, milky white flowers stippled with fine black cherry highlights. 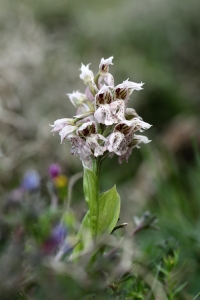 With a couple of hours remaining available to us in the afternoon, we decided to head back to the peaceful village on the outskirts of which our hotel rested. Yiannis (the other Greenwings guide) and I knew there ought to be a good selection of new orchids to be found nearby. 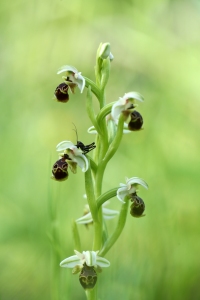 It was here, in 2018, that we found our first Ophrys candica, but once again the fickle seasons were to play tricks on us – O.candica was nowhere to be seen, apparently not yet in flower – though other familiars were exactly where we expected to find them, and in fabulous fresh condition – Ophrys rhodia, Ophrys umbilicata, and Ophrys ferrum-equinuum. The latter is always popular, with colourful flowers each sporting a shiny, metallic horseshoe. “Juicy…” as one of us was heard to murmur appreciatively. 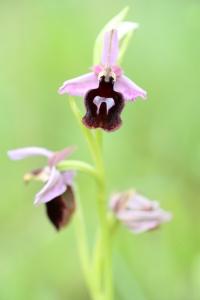 Higher up, we found another clue that suggested a confused flowering season – a fine example of the Giant Orchid, Himantoglossum robertianum, a very early-flowering species that had no business still being in bloom in early April – in 2018 the plants we found were mostly well on their way to setting seed. Some of the group were familiar with the Lizard Orchids Himantoglossum hircinum found (mainly) in Kent back home in the UK – these relatives of the Lizards look very different indeed to them, with richly patterned flowers that look a little like they’re wrought of melted wax. 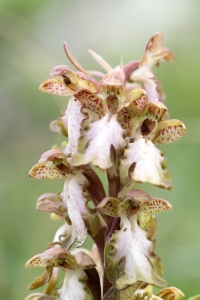 We slowly headed back downhill towards the hotel, the prospect of a warm welcome, a cold beer for some, and a delicious evening meal now calling strongly. The orchids weren’t quite done with us though – on the very edges of the road, growing from the banks above a wheely bin in the village, we found the delicate chocolate brown and yellow flowers of Ophrys sicula, our eleventh species of orchid in a splendid first full day on the island.

While the guests settled in to their rooms before dinner, I headed out to the other side of the village for a little recce before the morning. I’d heard a rumour of a hybrid orchid on a hillside I’d not visited before, and wanted to see if I could find it and, furthermore, whether the site was worth visiting the following morning with the group for more orchids besides.

And what did I find? You’ll have to wait for tomorrow morning, just like my guests…

NB – I should be leading the Orchid Odyssey tour in Rhodes for Greenwings this week – due to the coronavirus outbreak, that’s been regretfully postponed for 2020. Instead, I’d like to invite you all to join me on a virtual orchid-hunting tour there, with daily posts throughout the week. I hope you enjoy them.