I think many naturalists have something they’d really, really like to see. One species in particular that they yearn for above all others, a holy grail. For some, that might be a flower that goes decades between sightings – the enigmatic Ghost Orchid Epipogium aphyllum has consumed its would-be admirers in Britain ever since it was first discovered here in the mid 1800s and, to this day, there are amateur botanists who obsess over this one orchid above all others.

For butterfly enthusiasts, it might be seeing a Purple Emperor Apatura iris for the first time. They are compellingly beautiful, after all, with wings of the deepest, richest, velvetiest purple – and they seem, when one finally does meet one, to be possessed of a depth of character unusual in an insect. They investigate intruders of all sizes and species in their wooded realms and, once initial curiosity is satisfied, are wont to perch out of reach and… well, it seems like they’re keeping a watchful compound eye on their besotted human admirers.

And then there are birders. As Mark Cocker memorably recounted in his Birders: Tales of a Tribe, birders are particularly prone to obsession. Their relationship with the objects of their desire transcends mere appreciation of a pretty bird. Entire lives are dedicated to the pursuit of birds. Sacrifices are made along the way – time, money, relationships and even, rarely, lives are lost. Mark puts it like this – “It is, in short, about the way the human heart can be shaped by the image of a bird”. 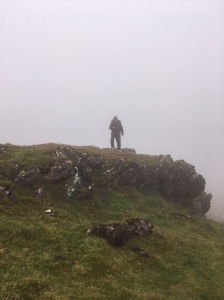 It had not been for want of trying that by 2018 I’d not seen one. From the first I failed to see, in Lincolnshire in the winter of 1990, to one here in the south mainland of Shetland earlier this year, I missed every single Snowy Owl I went to look for. I even managed to not see a breeding pair on territory in Iceland in 2009. They assumed a mythical status for me.

I came to dread hearing one had been found nearby. I naturally assumed I would not see it, after all. So it was with a sense of due, grim, resignation that I went to Fetlar in early October to search for the latest bird to have been discovered in Britain. By this stage, the twelfth time I had looked for a Snowy Owl since that first missing bird in 1991, I knew the script all too well.

Fetlar is an island here in Shetland redolent with Snowy Owl history for it was there that, between 1967 and 1975, Snowy Owls bred for the one and only confirmed period in British history. Nesting in habitat closely resembling the tundra on which they’re found in the far north, their story was chronicled by the late Shetland naturalist Bobby Tulloch and it was he who, famously, joined local birder and photographer Dennis Coutts in a pantomime horse costume in an attempt to approach the breeding birds closely enough, without disturbing them, to secure some photos. This doomed initiative was said to have been abandoned when a male Shetland pony began to display a keen interest in the back end of the pantomime horse…

I visited, in the company of my friend and Fetlar native, Maurice, the day after the latest owl had last been seen. The weather had broken down, badly, and we found ourselves searching for a white owl in fog so thick we could barely seen fifty yards ahead of us. With a keen wind blowing, dramatically reduced visibility, and my jinx at work, we didn’t stand a chance. Sure enough, despite covering some six miles of Fetlar hill, we didn’t see a thing. A few migrant thrushes and some local Starlings were the extent of the birdlife that emerged, briefly, from the soupy murk, before flying back into the enveloping clouds. 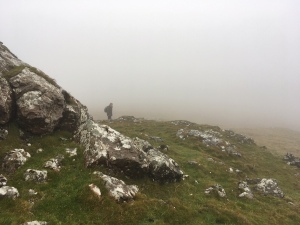 This didn’t really matter, as this was still a fine day out. I know no better storyteller than Maurice – in a place where the ability to spin a yarn is appreciated, he tells tales rich with folklore, history and humour. Our walk took us past the former home of one of Fetlar’s witches, Maggie o’ Grü; we found one of the likeliest trow holes I’ve ever seen; and somewhere out there, unseen in the swathed landscape, we passed by Haltadans, an ancient stone circle said to be the petrified forms of a fiddler and his wife surrounded by dancing trows, cast forever in stone when the sun rose upon them. (Haltadans is also the name of local group of Shetland musicians, one of whom is Maurice, who play compelling and irresistible tunes).

There was no danger of us being sun-struck that day. After hours of fruitless searching we retreated to Maurice’s family home on the island for a welcome feed of pies hot from the oven and mugs of sweet black tea. The curse of the Snowy Owl had struck again.

We didn’t like to give up though and, with a better day forecast, and inspired by fresh news from my good friend and Shetland Nature colleague, Brydon Thomason, we headed back up to Fetlar. While the rest of Scotland was sitting under a lump of rain coming off the Atlantic, Shetland was spared that morning. We’d no sooner arrived at the high ground the owl was said to favour than there it was, a white form on the hillside with watchful, golden yellow eyes. One might think that there would be a sense of anti-climax after decades of waiting for this moment, but no –  I was euphoric. All of those dismal failures, those hours spent scouring hills and moors, fields and – on no fewer than four occasions – the depressing surrounds of the docks at Felixstowe, all of those disappointments – they were worth it for this moment.

(Even the time a friend and I spent a good hour stalking a distant Snowy Owl high in the Cairngorms, only to find it was a bleached white Tesco bag wrapped tightly by the wind around a rock – even that moment of bathos was worth enduring now I had a Snowy before me.)

We spent the next few hours watching the owl as it hunted birds on the hill. Snowy Owls are adaptable predators, as happy taking rabbits or starlings in Shetland as they are lemmings in the Arctic. Our Snowy made short work of the local starlings – chasing them down in flight and, when they tried to hide in the low vegetation, bounding after them on the ground. We watched him make a kill in this way, the unfortunate starling quickly consumed before the hunt resumed.

In the distance, I could see my home island of Whalsay on the skyline. I’d come a long way to see a Snowy Owl that day – but I’d come much further still from the first bird I missed on a cold, bleak day in Lincolnshire. It felt fitting that this long-awaited owl should be on the same area of Shetland where once they felt so at home they’d become residents too. My journey mirrored theirs.

Like Loading...
This entry was posted in Uncategorized and tagged fetlar, haltadans, jon dunn, shetland, snowy owl. Bookmark the permalink.